I ended the first installment of this story with the first interview (TT) gave to the Roanoke Police Department (RPD) on 10/3/95 at 10:35 AM, a mere 9.5 hours after the murder when, as anyone in law enforcement will tell you a memory is best, she and the other people in the house stated they saw no one they could identify.  I quoted a couple of questions from the interview:

“But more specifically to sight and light:

(TT) was asked if she “didn’t get any better look at the guy”.

(TT) was asked, “…do you have any idea who this might have been?”

Between 10/3 and 10/4, (TT) told two other people (not the police) that someone else (FW) was the intruder. There is no follow up on this inconsistency that I can find in the entire record.

On 10/4/1995   the RPD received a call from a mystery woman in a phone booth. The woman refused to give her name. The woman refused to go to the RPD to give a statement. But…the woman said, “my friend, Mike Crump” shot Eric “Nike”, Jones. How did she know this? Mike Crump told her about it. She described him as 5”11” 185 lbs.; cornrows; medium skin; dark clothes. She said Mike shot Nike “on accident” and that (AB) was the actual target over a drug debt. Then she hung up the phone.

First of all, do you think Mike (or anyone else) is dumb enough to kill someone and then go tell anyone about it? If this woman was his “friend” who was telling the truth…and she was compelled to call the police, why did she call from a phone booth, hang up and never reach out again? It makes no practical sense. Nowhere in any of the information does it indicate that the police traced the call and went to the phone booth, or inquired as to any possible cameras in the area. But this mysterious call would mark the beginning of the end for Mike Crump. Even with all the other suspects, the RPD should have investigated, they laser-focused on this anonymous call.

(TT) and one of her sisters, (CT) and her boyfriend (RH) decided to go out for a ride with two of the children. According to (TT) testimony at trial, they were looking for someone who might look like the intruder from the night before; a black man wearing all black. They stopped at the corner store so (TT) could get a newspaper because apparently, she thought Nike Jones’s obituary would be in the paper,  less than 24 hours after the murder.

Her sister (CT) noticed a boy looking at (TT) in a strange way, mentioned it to her and then left her in the store and got back into the car. (TT) turned around casually to “glance” at him. She walked out of the store, got in the car and said that it was the man who murdered Nike.

He was a black man… wearing black. (RH) remembered him from school (assuming he was looking at the same person (TT) was pointing to) and (depending on who is telling the story) told her who he was. It was Mike Crump. When (TT) told the RPD about the encounter at the store, did they go to the store to interview the employees? Did they go and review the store’s security camera? NOPE. They waited three weeks before they bothered to go to the corner store and by then, the surveillance tape was taped over. If they thought (TT) was so credible, why did they wait so long?

The same day, a different woman called the RPD crime line (She gave her name) and told them she was in the car when her boyfriend (MW) went in the house and “shot a boy”. (MW) is not Mike Crump.

That same day The DEA and ATF notified RPD a possible “hitman” was in the area from New York.

Ironically, Nike’s brother (JJ) was “the” crack cocaine dealer in Roanoke at the time. According to multiple news stories, he was supplied by the Colombians based in New York, but the night of the murder, he was in prison. When their house was raided by the police:

“Jones was charged with the crime after police searched his mother’s house and found 132 grams of crack and a .44-caliber revolver in his bedroom. They also found $47,000 stuffed in a shoebox under his bed. Police believe that, for a time, Jones supplied most of the crack users in Southwest Roanoke. When Jones reached adulthood and was arrested, his case was taken over by federal prosecutors, and he faced a mandatory 15 years in prison. He got five years of that lopped off his sentence because he cooperated with the government and testified against his brother. The federal authorities eventually prosecuted the case because of the scope of (JJ)’ connections, which included purchases from Colombians in New York City. In July, (JJ) was convicted of drug and gun charges.”  Roanoke Times Article 1995

Nike’s lawyer was Randy Cargill…the brother of James Cargill, who represented Mike Crump for Nike’s murder. Sound strange? It did to me.

So now, in one day, the RPD had received various calls from people naming different suspects. None of them was present when the murder occurred. And there was a possible hitman in Roanoke from New York.

On 10/5/1995, at 8:00 AM, the RPD requested photos of Mike Crump and (JL). They also took a statement from (AB) who said the intruder was wearing a mask. (AB) apparently took off shortly after this statement. There was even a short delay in the trial because he could not be located. As of this writing, he has still not been located.

The RPD detective notes state “attempted to locate (WT), (AT) and (TT) to look at a photo lineup of Michael Crump-unable to make contact”

Why is Michael Crump the only person the RPD wanted the sisters to see when the RPD has no less than six possible suspects?

10/8/1995  Roanoke PD responded to an incident where (MW) was at a house with four other young men. (MW) (Who was Nike Jones, cousin) quietly begged the officer to arrest him because he was afraid the others were “going to kill me” because apparently, the other men at the house thought (MW) killed Nike Jones. The officers took (MW), cuffed him and put him in the back of the car. The officer told the other four men he couldn’t explain the charges because (MW) was a minor. (MW) told the officers that someone named (TrT) had killed Nike Jones, but refused to make a statement. The officer believed (MW) was genuinely terrified, but then took him home. I can find no reference to any follow up on this named potential suspect anywhere in the volumes of records. This is just another in a long list of suspects…they just seemingly ignored.

Why in the world would the detectives go to the victim’s home, in front of his mother, to show these three girls a lineup?  Only 1 of the 6 photos was anyone previously identified as the possible intruder who also had cornrows, and was wearing a dark hoodie. Guess who that one oddball photo was? It was Mike Crump. Nevertheless, none of the sisters could identify the intruder from the photo lineup…but that story was about to change.

At 3:20 PM The RPD “Rcd call from (TT’s) mother, she advised her daughters were starting to remember more, wanted to see lineup again, she felt it would be better if their father was present. Set up appointment for 8:00 AM on 10-10-95 – NEVER SHOWED”

This call (taken straight from the detective’s notes) is different from what (TT) testified to during the preliminary hearing, and at trial.

On 10/12/1995 “Detective Lucas spoke with (TT) by phone stated she would meet me at PD in about 20 minutes, wanted to look at lineup again. (30 min later) met (TT) at PD spoke with her for approx. thirty mins. Stated she could ID suspect-she had to leave had her child with her-child had a doctor’s appointment at 1430. I advised her to return after appointment”

So, a quick recap…After stating 9 times during the 911 call and in her first statement the day of the murder, and after seeing the photo lineup the first time, she has no idea who the intruder was and that it was dark. Also,  after promising to go to the PD and was TWICE a no show, she can now, eight days later, ID the murderer… but she had other things to do…so the RPD just let her leave.

That they believed anything she said is truly amazing to me, and her story has barely started to change…and it does, many times. To say the RPD detectives were incompetent is a compliment in my mind at this point… but it gets worse.

So on 10/12/1995, three hours after (TT) visit to the RPD, she returned and identified “the one on the top row in the middle”, as the murderer of Eric “Nike” Jones”. It is widely believed, and (TT) has said, that the police showed her other pictures of Mike, but I digress. The photo lineup had six pictures in two rows of three. However, there was only one picture of a man with cornrows, wearing a black hoodie. Guess whose picture that was? Mike Crump.

It is also worth noting that (TT) was collecting Social Security as she was “legally blind”, and even to this day, of the 8 people in the house, she remains the only person who has claimed to identify anyone at all.

On 10/30/1995, (TT) gave her third (and final) statement to the RPD. This time, her memory had become so clear, and her description of the murderer so specific that she is now speaking in general investigative terms? It also happened to damn near match exactly what the mystery phone booth caller from 10/4/95 said…before hanging up, never to be heard from again:

Question: “OK, and the suspect that you saw, could you give me the best description of him that you can.”

Question: Okay, but what was he wearing?

Answer: “He was wearing a black fitted sweatshirt that tied tight around his head. He had on a pair of black jeans, a pair of black/white with green detailed Nikes”

Well, now…she just described the average black male. I wonder how many men in Roanoke in 1995 would have fit that description.

Now we are through the three statements (TT) gave to the RPD. Before we dive into the next installment with the preliminary hearing and the trial, I need to explain a bit of information about the layout of the house. It’s important for understanding why the statements and (TT) constantly changing testimony are lies; she was clearly coached, but not very well.

Below is a basic schematic of the inside of the house. The partition wall goes a little further past the door, and the dining chairs are not located where they were in the crime scene photographs.

Understanding this layout is most important because, with the 4’ tall partition wall where it is, there is no way anyone laying on the sofa watching TV could see anything below the waist level of anyone even in daylight, much less in the dark. Add to this that she is legally blind, and this schematic doesn’t detail the other thing that was between the sofa and the door. It was a chair pulled out and catty-cornered towards the sofa, where Nike Jones was sitting… talking to (TT) when the intruder started “rattling” the storm door. 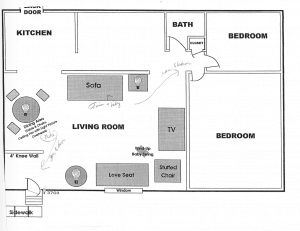 #freemikecrump, where is justice, wrongfully convicted